“Dressed in what looked like a white lab coat and wearing a tin foil mask with a wrap around visor sunglasses, Vulgarithm took to the stage next. Andy "Dirt" McGurk plays guitar to a backing track of riffs and club classics all in front of a screen projecting, for the most part, himself. He is totally over the top and completely unique.” - Tony Bell

Vulgarithm brings you the festival vibes

Small festival including many uncovered bands

Uncovered brings you a night of all original music with: 2 Electric Blue/Vulgarithm and Future Theory.

The Final of the Cambridge Band Competition

Vulgarithm on the Doc Mason Show

Vulgarithm on Peterborough Most Wanted

Vulgarithm interview and live performance on Peterborough most wanted

Uncovered present a night of all original music with Eddie and The Wolves, Mick Cyclone and Vulgarithm. 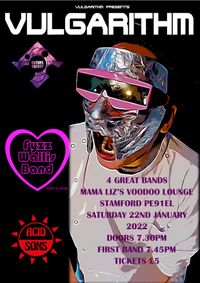 An eclectic night of music to help protect, educate and stand up for rights of children in war

VULGARITHM is for fans of riffs and club classics on steroids. Andy "Dirt" McGurk takes the best metal riffs of the early 2000s, mixes it up with 90s dance music, and adds a unique touch of crushing beats. It is for fans of music who crave originality and fresh ideas, and for those who seek to escape. At the end of 2019, Andy "Dirt" McGurk was in BlackHawkDown which is going one direction, but also hollowtechnic which had been going for 10 years. It was in and out of band lineup changes, had recorded many albums from home, but it was going nowhere else. He needed a fresh start, a fresh identity and a fresh sound, Vulgarithm was the product of that discovery. Vulgarithm is has only been around since 2020, so just as Dirt was about to bring it to the live scene, COVID hit. He had performed a couple of live sets from his teaching room but until then he just had to wait until lockdown eases. The new goal is to have as many people know about Vulgarithm as possible before heading out into the gigging world.